If the accused is convicted by a magistrate, they can appeal to the District Court against:

When the accused has been convicted of the offence they are referred to as the offender. The offender has 28 days to lodge an appeal or let the court know they are planning to appeal. If a case was dealt with in the Local Court, the appeal will be heard in the District Court. If the trial or sentencing was in the District or Supreme Court, the appeal will be to the Court of Criminal Appeal. 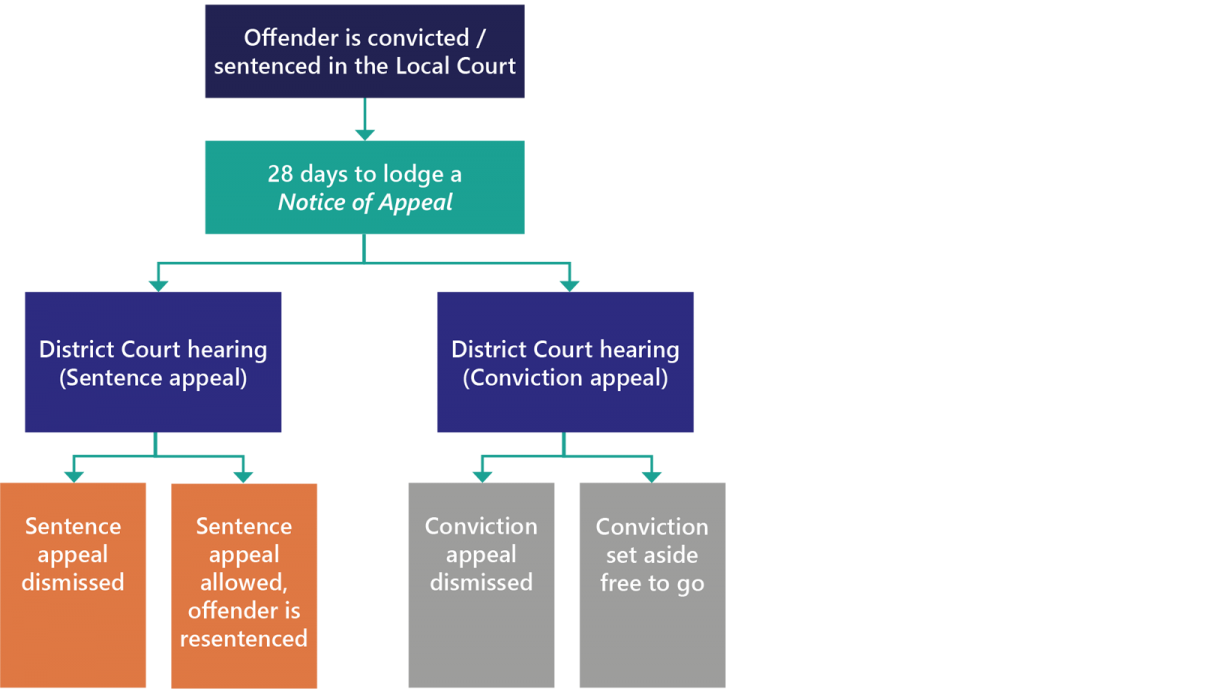 How will I know the offender is appealing?

To appeal to the District Court against a Local Court conviction or sentence, an offender has to file a Notice of Appeal within 28 days. This has to state what the appeal is against (the conviction, sentence, or both) and the grounds for the appeal.

If the offender misses this deadline, they can apply to the District Court for leave (permission) to appeal if it has been less than three months since the conviction or sentencing. After three months, it is too late to appeal.

If the District Court grants leave to appeal, it sometimes hears the appeal straight away, but often adjourns it to a later day. Appeals against convictions are more likely to be adjourned than sentence appeals.

This same process applies if the ODPP is appealing against a sentence.

Can the offender apply for bail?

An offender who is in custody can apply for bail while waiting for the District Court to hear an appeal. The court will apply the usual bail tests (see Investigation and arrest in Main steps in the prosecution of a serious crime).

An appeal to the District Court will be listed before a single judge, normally within two or three weeks of being filed, although it can be longer in regional NSW.

In a District Court appeal, the judge decides the matter as if hearing it for the first time after reviewing all the documents and evidence from the Local Court proceedings – including the transcripts if there was a hearing.

In a conviction appeal, the judge will decide the matter on all the evidence presented in the Local Court, and by reading the transcript of the Local Court hearing. Occasionally, fresh evidence (new evidence) will be sought to be presented by defence. However this can only be presented if the Judge determines it is in the ‘interests of justice’.

After the judge has considered the evidence, the ODPP and the defence will present submissions as to why the offender should be found guilty or not guilty. The judge will then determine if the evidence is sufficient to prove the prosecution case.

If it is a sentence appeal, fresh evidence can be presented and it is common for an offender’s lawyer to provide psychiatric or psychological reports, character references, and updated Sentencing Assessment Reports. Sometimes the character witnesses, such as the offender’s employer, family or friends, will give evidence. The offender might give evidence themselves, for example, to tell the court they are sorry for the crime, about rehabilitation or other programs they have started, or about the impact being in custody would have on them and their family.

After the judge has considered that evidence, the ODPP and defence will present submissions on the appropriate sentence to be imposed. The judge will then provide reasons and ultimately determine whether the sentence should remain unchanged or be reduced.

In a conviction appeal to the District Court, the judge will either:

In a sentence appeal (by the offender or the ODPP), the judge will either:

A judge hearing an offender’s sentence appeal can increase rather than reduce the sentence, but has to warn the offender if they are considering doing so. The offender then has the chance to withdraw the appeal.